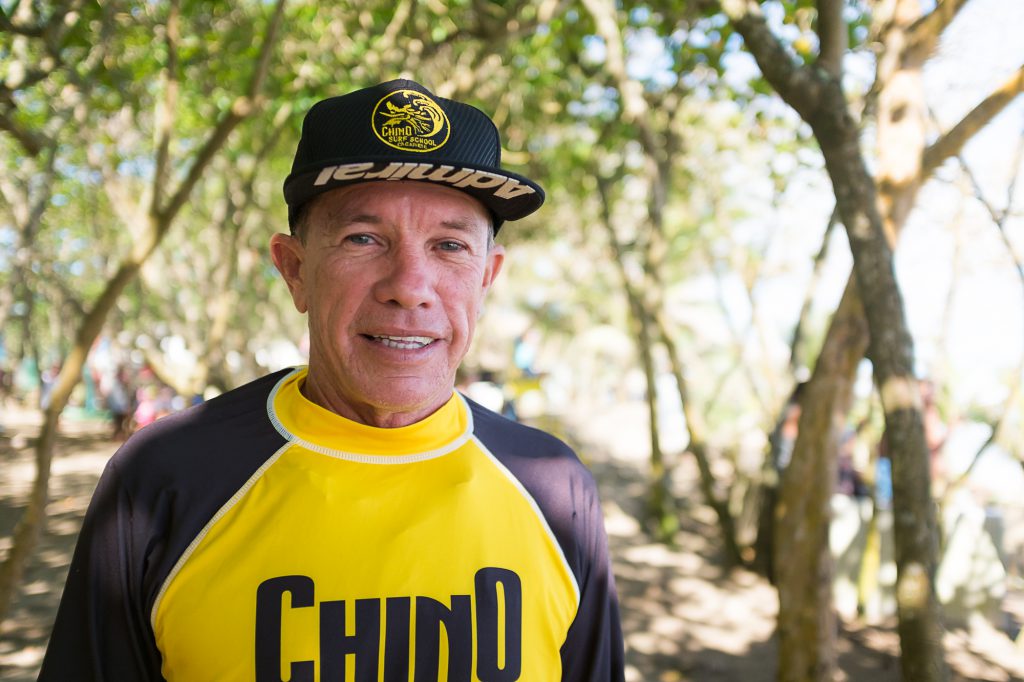 Our pro surf coach, Heriberto will give you the best surf tips for your surf vacation in cabarete, Dominican Republic

Chino Surf School Cabarete is the only surf school on the North Coast of Dominican Republic to offer high-performance coaching for advanced surfers. Our resident surf coach, Heriberto Tinoco has over 30 years experience coaching and over 40 years Surfing and competing professionally and had the honor to coach the Venezuelan National Team. We sat down with Coach Heri to get a feel for his methods and what it’s like to be trained like a pro by the most experienced surf instructor in Cabarete.

Can you tell me a little about yourself- where you’re from, and when and how you started surfing?

I was born in Venezuela and I started surfing when I was 16, and well I’ve always been close to sports all my life.  At one point in my life I decided to go professional with surfing and coaching and I put all my focus on the sport, travelling around the world and competing and just living the professional life of a surfer. Right now I’m living in Cabarete, Dominican Republic and I’ve found my roots here again, working in Chino Surf School and giving all my heart and knowledge to the school.

What other sports did you play?

I’ve been in martial arts all my life, from 5 to maybe 42 I was a professional kickboxer and also Futbol all my life, motorcross for a while, always been an athlete. Now, I’m not so young to be doing those sports anymore so all my focus is on surfing. I do exercise and train myself personally too.

Have you ever been a competitive surfer? Did you compete growing up?

Of course I competed but in reality I don’t really like to be competing for myself, I need to compete because I coach people who compete so I needed the first hand experience. It was fun at the time, learning the technical part of a contest. It’s great to be able to pass on what I learned from competing to the people I coach. I didn’t want to be a world champ or anything when I competed, just wanted the first hand experience.

So you did do some competing for a while?

Ya I competed for about 4 years, in different places, different levels.

When did you make the switch to Coaching?

Well I was Coaching even before I was competing. With all the knowledge I had in the sport, people still didn’t really believe in surf coaching. At that time, having a professional with you was not as developed as it is now. When you would talk to people and they would ask what I did, I’d say “I coach surfers”, and they would look at me and kind of be like “What? What do you mean?” Though surf competitions were already happening at a very high level and surfers wanted that kind of life, so more people got involved. But the time in history that really was important for surf coaches was when Mick Fanning returned to the World Surf league after a long time dealing with an injury and he appeared with a couple of coaches and won the world title. At that point, I think 2007, people started to believe more in coaches, the support of the coaches, staying with you like a team. Before the only coaches would be for a national team, for a country competing in the World Surfing games, and you had the opportunity to be there with your guide.

How did you start coaching the National Team for Venezuela?

I’ve been surfing all my life, since I was 16, I was very structured and professional and organized with it. The surfers in my country don’t really have that kind of organization, so a few of us got together and created the Surf Federation of Venezuela. After that they gave me the responsibility to coach the national team. At that time I was a martial arts instructor and I was in 4 different sports in the national level for Venezuela. I was competing internationally in motocross, I was playing at an international level for Futbol and Baseball, and in martial arts also doing a few important things for my country. As an athlete, I had the knowledge about competing at a high performance level. I knew how to train my body, how to get technical, so yes I was surfing but then they asked me to coach the national team because I was a good surfer. I knew how to prepare an athlete physically, I knew about the history of surf. And I said OK.  I think everything in my life was pushing me to be a professional coach. 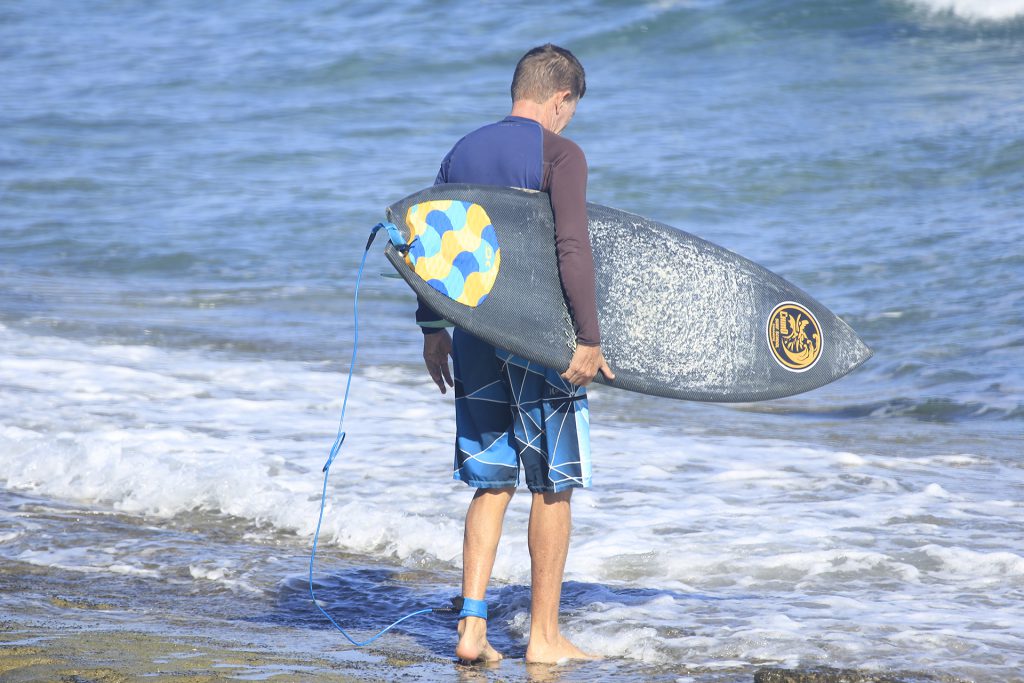 What’s your approach with the Surfers you coach?

I studied oceanography in university so I also have scientific knowledge about the ocean too, so for me to watch the field, the court, it was like reading a book. Not everyone can do that, I like to ask my pupils, “what do you see?” typically they say “a wave, I see it’s head high, and it’s windy” but I ask, “what do you read? If you had a heat right there, how would you decide where you’re going to go, which wave, how will you try to catch it?” -If you don’t have a plan, you’re going to lose, and no matter what kind of surfer you are, you must read the ocean, read the breaks, the current, the reefs, everything because it’s a system, it’s very dynamic and it’s working there ready for you to read. If you know the parameters, exactly, you can read what’s going on there, and if something changes (in the conditions) you will be ready for the change because you know how the ocean is working for that beach.

What would you say is the most common mistake experienced surfers make in the water? Would you say wrong equipment, body positioning/technique, maybe just not knowing the ocean well enough?

It depends on the objective of each surfer, there’s the weekend surfer, only wants to have fun. There’s others who want to be a pretty good surfer but doesn’t want to be a professional or a competitor, and then there are the ones who want to be the best they can be and are focused or maybe they even want to be in the World Surfing League. Unless you know what their goal is you can’t really say someone is doing something wrong.

A beginner for example, you are most likely to find biomechanical errors, someone at a different level, it’s possible the mistake is how they are reading the ocean, not picking the right wave, not paddling in the right way so they’re tired reaching the lineup. For a professional maybe it’s in the strategy, maybe they aren’t in the right shape or they aren’t making the right decisions when paddling with other surfers, it all depends on their purpose in the water.

So what’s the first thing you look at when critiquing a surfer?

The first thing I look at is their line, when you see their line, how he draws on the wave, you can see exactly what that surfer has. The wave is a wall of water, how do you draw on it, how do you turn, what kind of drop, where you make the bottom turn, how you read the ocean… what line did you draw on the face of the wave? This is very important, this is the big difference between somebody who knows how to stand on a wave and ride a line, but a professional will use every section of the wave to make the hardest turns and to do that, you need to have a lot of knowledge and precision about where you are, where you set your bottom turn, when to go down, when to go in the middle, when to go faster. That’s the first thing I look at when I’m watching a surfer, after that, I can make a good conclusion about what that surfer needs. After that I know everything about their technical knowledge, their background, their physical shape, and their strategy in the lineup. 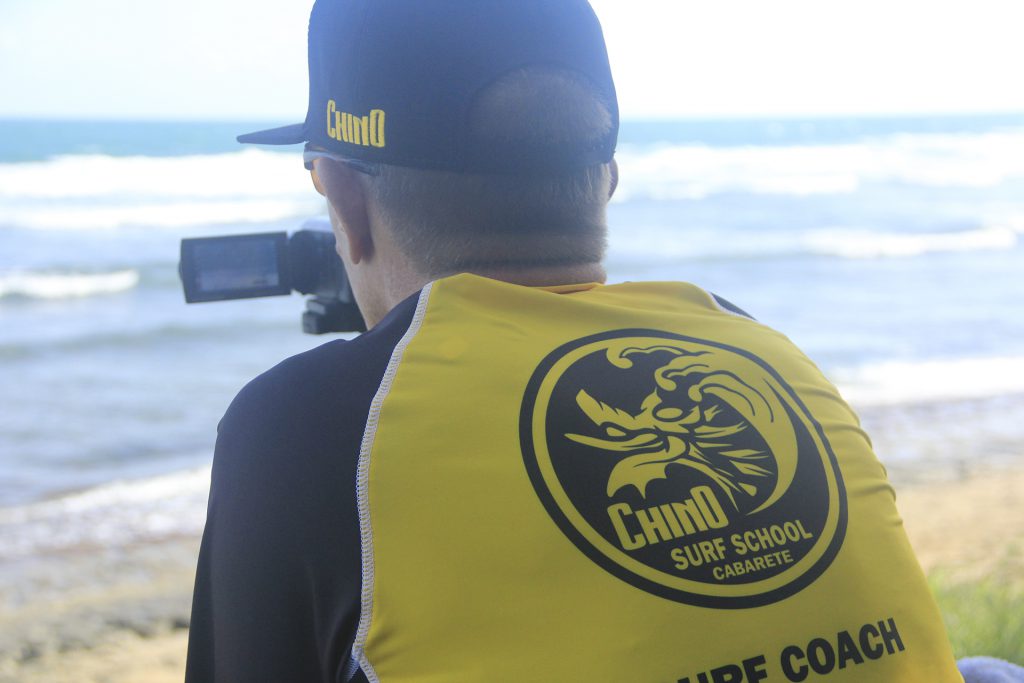 Using video as a tool to coach a surfer in the water at Chino Surf School, Cabarete

How about online coaching, how would you go about Coaching a Surfer that isn’t here at Encuentro?

Definitely, I like to use video even in person to show exactly what I’m seeing from the surfer.

How has it been going for you here with your Coaching and surf school so far?What has the feedback been like?

It’s nice to be here, in the beginning I was bringing people for myself to train professionally. Right now I’m coaching my assistants, and I think I have the best surf instructor team on the beach. Every day they are getting better, they have the curiosity to ask questions, and I want to pass the knowledge on like that, the classical way, not telling them what they need to do but letting them ask. They are very professional. 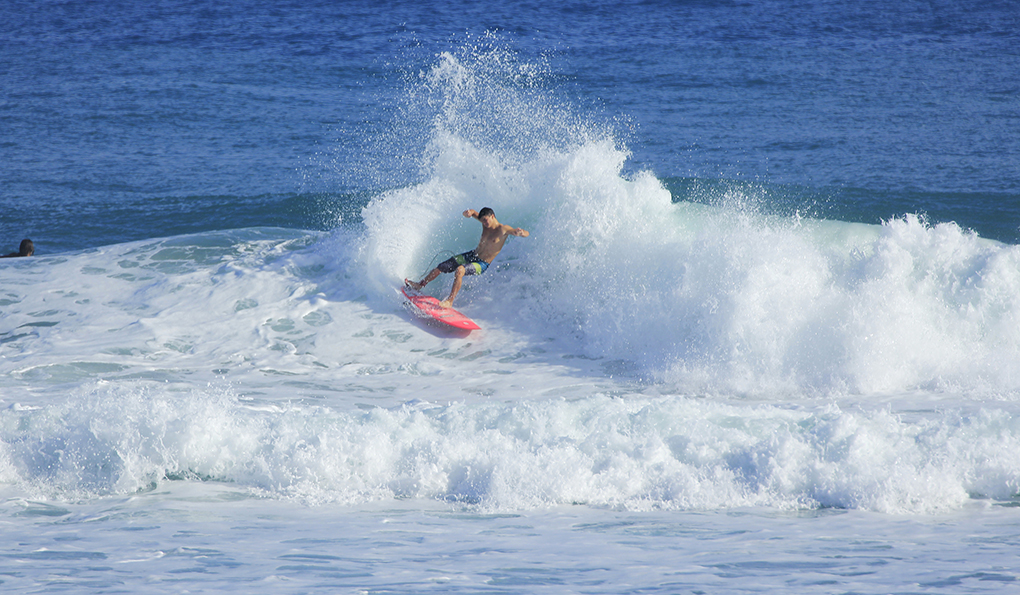 Max Self finding a wall of powder in the Atlantic Ocean

Are you coaching anyone else here now?

I’ve trained with a  few of the guys here, Andres Compres Ramos, Max Self, Zion Balbuena, Brandon Sanford, just a few of the most prominent guys, we all met for a seminar with Chino and Chepe Gomez for high performance surfers. We did this eight years ago as well with Pedro Fernandez and Bobo.

Who should we watch as they develop as a Surfer here in DR?

There are a couple of guys doing it pretty well, I think Max Self, he has a lot of talent in the water.

As a Coach, do you think physical training is a big part of it too?

Yes I think your physical shape is a huge part of it, if you are in shape, you’re going to be able to develop better in the water. I would say in every situation it’s equally important to be in shape as everything else. Strategy is important, technique, but if you want to be really good, you must train. On big days, you need to have good strategy, where to paddle in, where to set yourself. On perfect days you need good technique to make turns, but everyday you go surf you’ll find something different. So you have to be able to solve any situation. It’s not like any other sport where the court and the goal is the same every time.

Does anyone else offer this kind of service in Playa Encuentro?

No I don’t know anyone else here doing this, maybe a few guys coaching (at a higher level than beginners) but not really professionally and full time. These guys are knowledgable and famous so people want to train with them, and they are travelling around the world and competing a lot so they have tons of experience to share.

Maybe the Left in Encuentro, well my favorite is Coco Pipe, but Canal is an amazing wave, well it depends on the day, on a perfect day, the Left is perfect, I mean PERFECT. But sometimes I like the more aggressive wave like Coco Pipe, where you’re over the reef and the wave is strong and not so perfect- that gives me emotion, you know, trying to survive. But ya when you want to have fun and make turns and kill waves, I think Canal is the best, turns and turns, so many turns you can make on that wave. But then on a glassy day, smaller waves, Mananero is incredible because you get barrelled. But definitely on the North Coast, there are so many spots here. Cabrera, Nagua, I mean you look on the map and see so many reefs. But anyway, when are we going to eat?